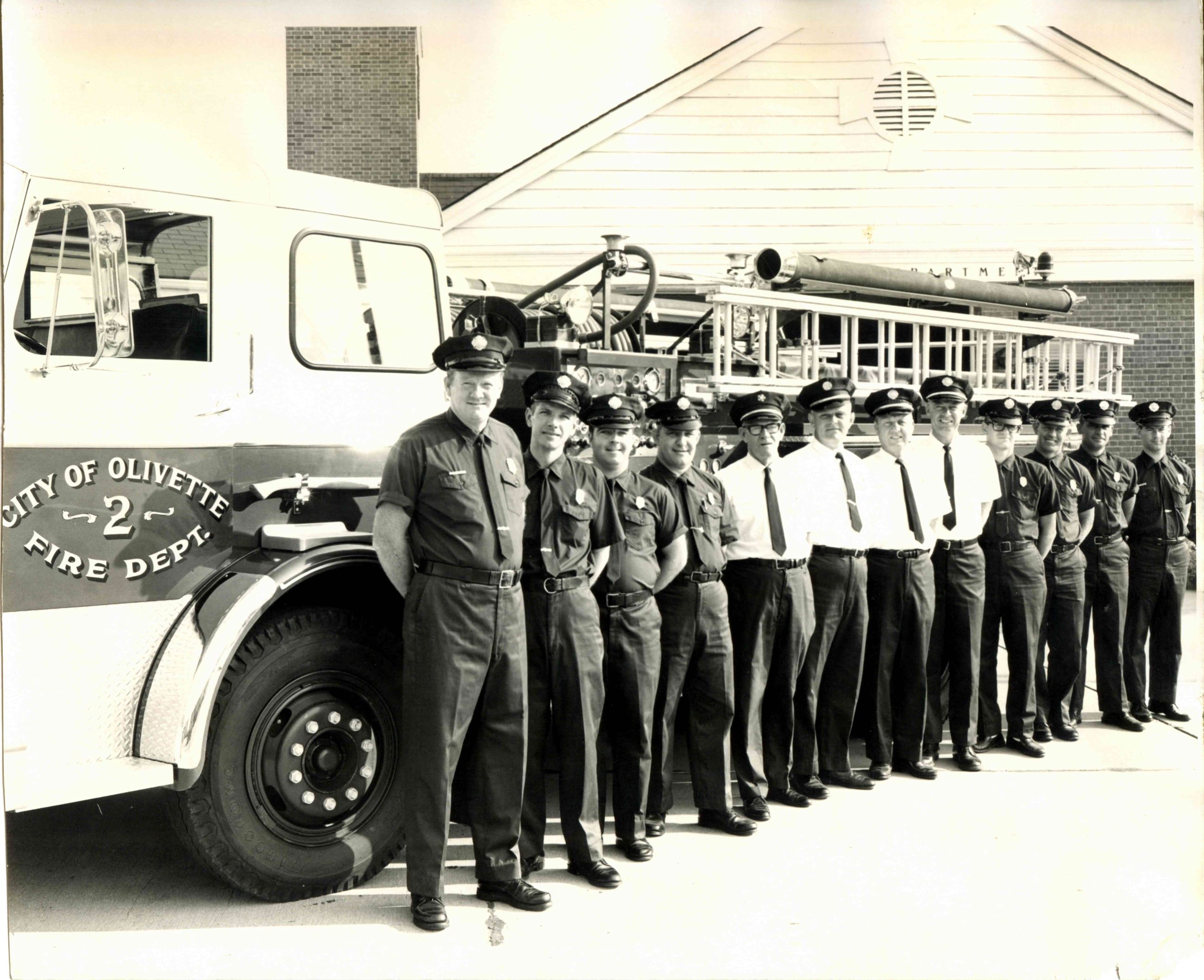 For many years, Olivette depended on University City for its fire protection paying for this service on a per call basis at the rate established by agreement and ordinance of $50.00 per call and $50.00 per hour after the first hour.

During the years, 1947-48, the Board of Trustees of Olivette, under the direction of Clarence W. Miller, as Chairman, discussed the possibility of developing a town Fire Department and adequately housing it; however, the idea did not progress beyond the talk stage, mainly for the reason there were no available funds at the prevailing low tax rate.

During the latter weeks of 1949, the decision was made to organize a non-profit, pro-forma corporation with authority of the Board of Trustees. The Corporation would raise monies and make necessary commitments for the purchase of a suitable Fire Engine and necessary equipment. Additionally, they proceeded with drawing plans and letting contracts for the building of a combination Fire Engine House and Town Hall; providing, however, there should be no increase in the then prevailing tax rate of .30 per $100.00 assessed valuation.

This move became imperative the early part of 1950 as University City increased their rate per call from the previously established $50.00 per call to $300.00 per call, per hour. This ultimately caused the contract between the township of Olivette and University City to not be renewed.

In March 1951 the Board of Trustees of Olivette purchased a pumper with the necessary equipment at an approximate cost of $13,500.00, from the Central Fire Truck Corporation, which was paid out of general revenue.


The Board of Trust

The Commission also entered into an agreement with, and made a monthly rental contract between, the Town and Walter J. Broeker for the temporary housing of the equipment and personnel in the Service Station building at 9655 Olive Street Road. Presumably the first fire station in the town of Olivette.

The Olivette Fire Department was officially ready for operation on September 8, 1951. The first fire for the new department was a truck loaded with refuse that caught fire while driving through Olivette on Olive Street Road.  The truck driver drove his burning truck up to the temporary quarters for the Fire Department where the fire was brought under control by the Chief and a number of volunteers who were present.  This incident occurred October 13, 1951.

As time elapsed developing current trends, ever-increasing costs, along with other obstacles presented themselves to the Fire Protection Corporation.

By December, 1951, it became apparent this organization could not overcome these problems. In January, 1952, the Board of Trustees requested a meeting of the Pro-Forma Corporation.

ng, the Corporation was dissolved and as the result of considerable discussion, it was decided to continue pursuing a town fire department. Financing of the project was through the issuance of bonds in the amount of $43,000.00 payable out of general revenue over a period of 20 years.

This Bond Issue proposition was presented to the voters of the town at the general election held April 1st, 1952. The Bond Issue was approved by a resounding majority.  Bonds were floated, sold and a Public Works Commission was created. This Commission, after a complete survey of the Town, selected and ultimately purchased the lot located at 9473 Olive Street Road; the current location of the fire house today.

Ground breaking at this lot was in the early part of September and it was expected that the Department would take occupancy of the building on or about November 15th, 1952.

According to accurate records, the department had responded to 52 fires through 4:00 P.M., Sunday, October 26, 1952.  These 52 fires, at the rate being charged by University City per call at the time the Olivette department went into operation, would have cost the taxpayers of the Town of Olivette $15,600 or more.

The summer and fall of 1952 were recorded as the driest in the memory by the U.S. Weather Bureau; innumerable fires were prevalent throughout St. Louis County as well as in most of the state. The cornerstone laying ceremonies were delayed due to an alarm that called out the Olivette Fire Department to assist in fighting a blaze in Creve Coeur. 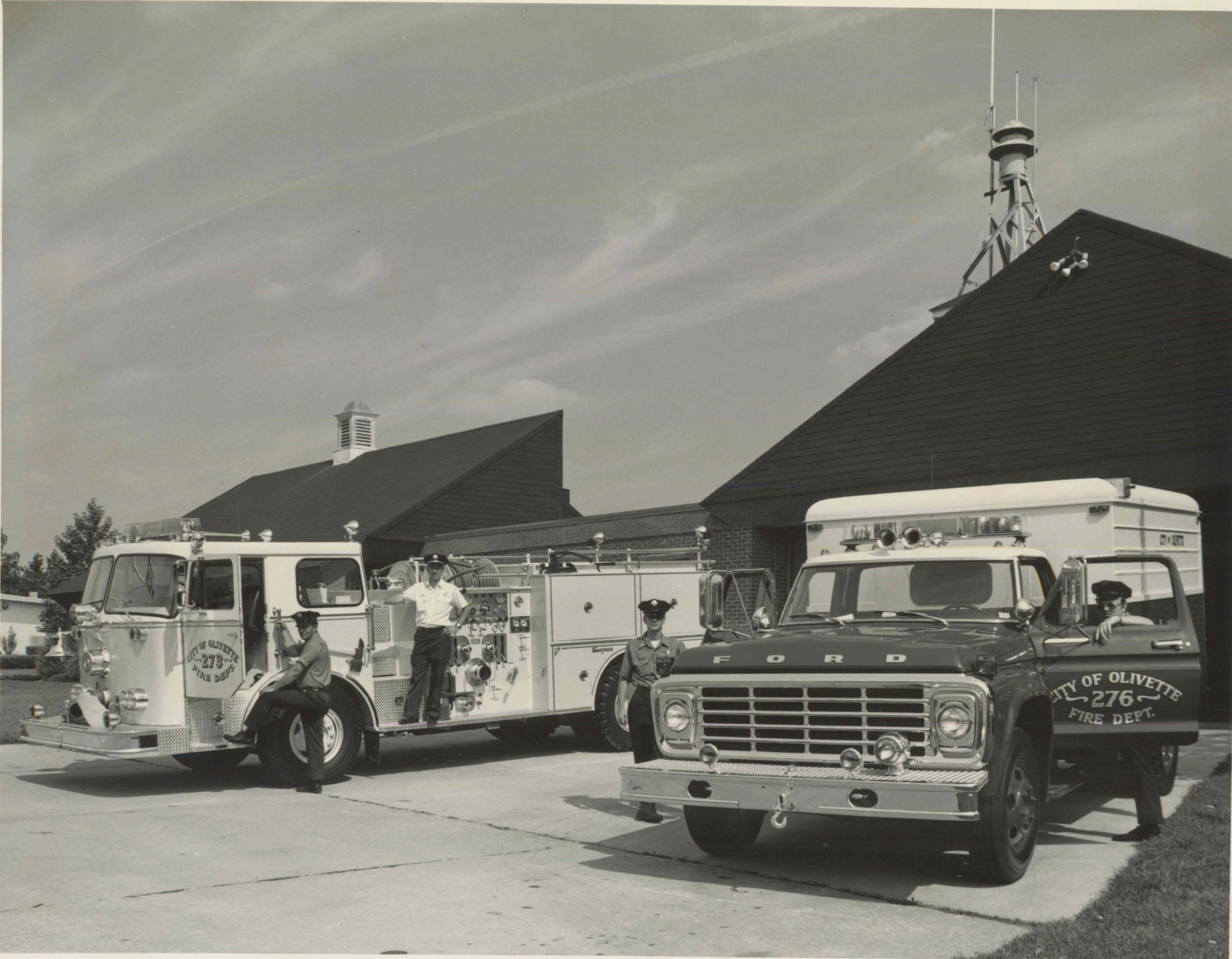 Chief Thompson, Captain Sage, Fire Commissioners Klyman and Rhoads, together with a number of the volunteer fire fighters, were in full dress uniform and had the engine all “slicked up” for the ceremonies when the alarm sounded.  After bringing the blaze under control they returned to the Engine House but before they could get the water tanks on the fire engine replenished another alarm sounded and off they went to another fire.

Chairman Ray Mills concluded the ceremonies could be no longer delayed awaiting these busy dignitaries and local volunteer firemen; so therefore the program was started and completed by the time the second fire was brought under control.

However, Fire Commissioners Klyman and Rhoads, Supply Commissioner Bob McElwain, together with the Fire Chief and Captain, and a number of the volunteers, arrived at the new building in time to affix their signatures to this historical document.

That soiled page is visual evidence that firefighting is a dirty job.

During the1960s, a 1963 Seagrave Pumper was purchased and the Central Pumper was moved to reserve status.  During this time, 13 paid firefighters were employed.

In 1976, the first rescue truck was purchased.  In December 1977, the paramedic program began, and paid personnel were increased to 23. That included:  one Fire Chief, three Battalion Chiefs, three Captains, three Firefighter/Engineers, twelve Firefighter/Paramedics and one Secretary.

In 2005, the city purchased twin Crimson Fire, 2000 GPM pumpers that were both capable of ALS care and Firefighting activities. One of these pumpers replaced the Pierce Dash and the other replaced the rescue squad, which was moved to reserve status.

In the span of just twelve months, the most recent historical event in decades happened within the department. Ten, of the 22 uniformed members of the Olivette Fire Department retired From December 2008 to December 2009, which is an unheard of event in the St Louis County. This exodus caused the department to lose over two hundred and thirteen years of combined experience, and all of the line officers.  This included the Fire Chief, five Battalion Chiefs a Captain and three Firefighters.  Although Olivette lost valued experience, it gained an opportunity to move into the future with the excitement and an open mind. A Council vote in late February 2010 thrust Olivette into the spotlight once again. The Council voted and approved for the department to purchase, staff and operate its first Ambulance. This unit will allow the Firefighter- Paramedics of the department to transport residents to hospitals for the first time in its history.  As you can see the Olivette Fire Department has come a long way from its humble beginnings. Although new technology and methods have influenced the department, one thing remains the same our strong desire to provide the best possible service to our residents.