According to the Federal Emergency Management Administration, the following tips can help you during an earthquake:

If in a moving vehicle

If trapped under debris 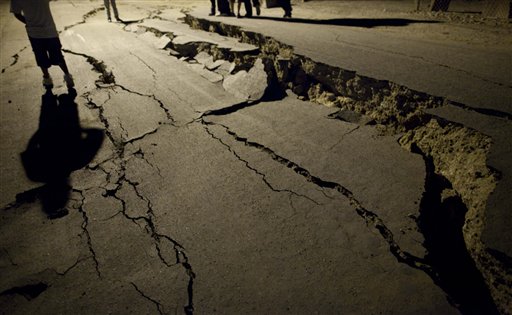 Heat kills by pushing the human body beyond its limits. In extreme heat and high humidity, evaporation is slowed and the body must work extra hard to maintain a normal temperature.

Most heat disorders occur because the victim has been overexposed to heat or has over-exercised for his or her age and physical condition. Older adults, young children, and those who are sick or overweight are more likely to succumb to extreme heat.

Conditions that can induce heat-related illnesses include stagnant atmospheric conditions and poor air quality. Consequently, people living in urban areas may be at greater risk from the effects of a prolonged heat wave than those living in rural areas. Also, asphalt and concrete store heat longer and gradually release heat at night, which can produce higher nighttime temperatures known as the "urban heat island effect."

Heat Index
A number in degrees Fahrenheit (F) that tells how hot it feels when relative humidity is added to the air temperature. Exposure to full sunshine can increase the heat index by 15 degrees.

Heat Cramps
Muscular pains and spasms due to heavy exertion. Although heat cramps are the least severe, they are often the first signal that the body is having trouble with the heat.

Heat Exhaustion
Typically occurs when people exercise heavily or work in a hot, humid place where body fluids are lost through heavy sweating. Blood flow to the skin increases, causing blood flow to decrease to the vital organs. This results in a form of mild shock. If not treated, the victim’s condition will worsen. Body temperature will keep rising and the victim may suffer heat stroke.

Heat Stroke
A life-threatening condition. The victim’s temperature control system, which produces sweating to cool the body, stops working. The body temperature can rise so high that brain damage and death may result if the body is not cooled quickly.

To prepare for extreme heat, you should:

What you should do if the weather is extremely hot:

An emergency water shortage can be caused by prolonged drought, poor water supply management, or contamination of a surface water supply source or aquifer.

Drought can affect vast territorial regions and large population numbers. Drought also creates environmental conditions that increase the risk of other hazards such as fire, flash flood, and possible landslides and debris flow.

Floods are one of the most common hazards in the United States. Flood effects can be local, impacting a neighborhood or community, or very large, affecting entire river basins and multiple states.

However, all floods are not alike. Some floods develop slowly, sometimes over a period of days. But flash floods can develop quickly, sometimes in just a few minutes and without any visible signs of rain. Flash floods often have a dangerous wall of roaring water that carries rocks, mud, and other debris and can sweep away most things in its path. Overland flooding occurs outside a defined river or stream, such as when a levee is breached, but still can be destructive. Flooding can also occur when a dam breaks, producing effects similar to flash floods.

Be aware of flood hazards no matter where you live, but especially if you live in a low-lying area, near water or downstream from a dam. Even very small streams, gullies, creeks, culverts, dry streambeds, or low-lying ground that appear harmless in dry weather can flood. Every state is at risk from this hazard.

Flood Watch:
Flooding is possible. Tune in to the National Ocianic and Atmospheric Administration (NOAA) Weather Radio, commercial radio, or television for information.

Flood Warning:
Flooding is occurring or will occur soon; if advised to evacuate, do so immediately.

Tornadoes are nature’s most violent storms. Spawned from powerful thunderstorms, tornados can cause fatalities and devastate a neighborhood in seconds. A tornado appears as a rotating, funnel-shaped cloud that extends from a thunderstorm to the ground with whirling winds that can reach 300 miles per hour. Damage paths can be in excess of one mile wide and 50 miles long.

Some tornadoes are clearly visible, while rain or nearby low-hanging clouds obscure others. Occasionally, tornadoes develop so rapidly that little, if any, advance warning is possible.

Before a tornado hits, the wind may die down and the air may become very still. A cloud of debris can mark the location of a tornado even if a funnel is not visible. Tornadoes generally occur near the trailing edge of a thunderstorm. It is not uncommon to see clear, sunlit skies behind a tornado.

Thunderstorms develop in warm, moist air in advance of eastward-moving cold fronts. These thunderstorms often produce large hail, strong winds, and tornadoes. Tornadoes in the winter and early spring are often associated with strong, frontal systems that form in the Central States and move east. Occasionally, large outbreaks of tornadoes occur with this type of weather pattern. Several states may be affected by numerous severe thunderstorms and tornadoes.

During the spring in the Central Plains, thunderstorms frequently develop along a "dryline," which separates very warm, moist air to the east from hot, dry air to the west. Tornado-producing thunderstorms may form as the dryline moves east during the afternoon hours.

Along the front range of the Rocky Mountains, in the Texas panhandle, and in the southern High Plains, thunderstorms frequently form as air near the ground flows "upslope" toward higher terrain. If other favorable conditions exist, these thunderstorms can produce tornadoes.

Tornadoes occasionally accompany tropical storms and hurricanes that move over land. Tornadoes are most common to the right and ahead of the path of the storm center as it comes onshore.

How Tornados are Formed

What to do During a Tornado

If Indoors
Go to a pre-designated shelter area such as a safe room, basement, storm cellar, or the lowest building level. If there is no basement, go to the center of an interior room on the lowest level (closet, interior hallway) away from corners, windows, doors, and outside walls. Put as many walls as possible between you and the outside. Get under a sturdy table and use your arms to protect your head and neck. Do not open windows.

If in a Car
Get out immediately and go to the lowest floor of a sturdy, nearby building or a storm shelter. Mobile homes, even if tied down, offer little protection from tornadoes.

If Outdoors
Lie flat in a nearby ditch or depression and cover your head with your hands. Be aware of the potential for flooding. Do not get under an overpass or bridge. You are safer in a low, flat location. Never try to outrun a tornado in urban or congested areas in a car or truck. Instead, leave the vehicle immediately for safe shelter. Watch out for flying debris. Flying debris from tornadoes causes most fatalities and injuries.