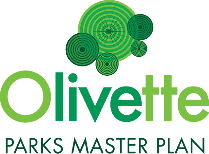 In June of 2017, the City kicked-off a Parks Master Plan.  Led by the Lawrence Group, the Park Master Plan utilized public meetings and on-line surveys to hear from residents what improvements they would like to see in the City’s five parks.  Residents showed strong support for park improvements, including fields, parking, play structures, and water play areas.  The final plan was approved by the City Council in July of 2018.  Proposed improvements were identified as short-term, long-term and vision, to help in the implementation of the plan.  The improvements proposed for this project include those listed under the short- and long-term items in the Parks Master Plan. Improvements include the removal of invasive species, water play areas, new playground equipment, and pavilion improvements.  Items not implemented under this project will remain under consideration for possible future implementation as needs and financing allow.

In February 2019, the City hired Navigate Building Solutions to assist with the implementation of the Parks Master Plan.  One of Navigate’s s first actions was to recommend hiring a firm to assist with assessing whether to remodel, remove or replace the existing Community Center.  The City hired Ballard*King to perform a similar study regarding the Olivette Community Center.  The current Community Center was built in 1962 as an elementary school.  In 1974 the City purchased the property from the Ladue School District and began using it as a Community Center.  Like the process used by the Lawrence Group, Ballard*King held public meetings, stakeholder meetings and offered a survey both on-line and in paper. Again, residents showed strong support for a new Community Center with amenities; including such things as a fitness area, gym, esports, and multipurpose rooms.  In addition, residents wanted a pool or aquatic area.  Ballard*King took the data collected and developed financial proformas.

On December 10, 2019, the Council held a first reading on a bill that will place a General Obligation Bond question before the voters at the April 7, 2020 election. Approval of a GO Bond in the amount of $16.2M.  Because the City has accrued the maximum of two-year reserves for its 2014GO Bond, the tax rate on that bond is set to decrease by $0.109 per $100 assessed value.  With voter approval, the City would utilize that $0.109 for the proposed Park project.  Funding of the entire project will require additional tax levy - $0.146 per $100 of assessed value to generate the entire $16.1M.